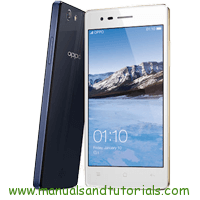 Oppo Neo 5s. An average range skimming the low that takes a while in the market and has not achieved much fame.

Download the Manual and User Guide of Oppo Neo 5s

In mid-2015, the Neo 5s came to our markets to improve the original version that had been available for almost a year. It is true that the device was not released to the market with the intention of being the king of the range to which it belongs.

Surely, the fact that the Oppo brand is not widespread also hinders its sale. Both factors came together to prevent users from enjoying this 5s that improved the Neo 5 in almost all aspects but still remained a very limited smartphone.

The Neo 5s has an internal memory of 8 GB that is scarce when we discount Android KitKat and the minimum applications that every user installs as social networks or mobile banking. The processor is a Qualcomm Snapdragon 410 that gives it a higher capacity but still insufficient. Even more so when accompanied by 1 GB of RAM.

The 8 MP camera allows us to record HD video at 720p but the photos they make only get a half, like their range.

One of its advantages is the size of the device since with its 4.5 “screen and a thickness of 8 millimeters, they make it very comfortable in the hand and good travel companion.You also have to take into account its Dual Sim capacity although none of them is compatible with 4G networks, which limits too much the reproduction of high definition video in streaming, whenever we use the mobile network.

In short, a mid-range device that will surely soon stop being in the hands of users.

Welcome to MAT, do you want to win a smartphones? Sign up!